Hope you had a great weekend. Today, our update covers single-family homes in Tampa for the week of 7-27-2018. We review current real estate market conditions, trends in pricing, and the current levels of supply and demand. Now let’s look at some of the most helpful and interesting blog posts, articles, and infographics we’ve run across this week.

Top things to do in Tampa Bay for the week of July 30-Aug. 5

Vans Warped Tour: The final run of the largest traveling music festival makes a stop at Tampa’s MidFlorida Credit Union Amphitheatre on Saturday, with a lineup including Reel Big Fish, Simple Plan and Less than Jake. $61 and up. amphitheatretampa.com.

Kevin Hart: The prolific comedian and star of the films Ride Along and Jumanji brings the funny to Tampa’s Amalie Arena on Saturday ($35-$125). amaliearena.com.

Find more back to school events at tampabay.com/thingstodo. Selling Your Home? Here’s 2 Ways to Get the Best Price!

Every homeowner wants to make sure that they maximize their financial reward when selling their home, but how do you guarantee that you receive the maximum value for your house?

Here are two ways to ensure that you get the highest price possible.

1. Price it a Little Low

This may seem counterintuitive, but let’s take a look at this concept for a moment. Many homeowners think that pricing their homes a little OVER market value will leave them with room for negotiation when, in actuality, it just dramatically lessens the demand for their houses (see chart below). Instead of the seller trying to ‘win’ the negotiation with one buyer, they should price their house so that demand for the home is maximized. By doing so, the seller will not be fighting with a buyer over the price but will instead have multiple buyers fighting with each other over the house.

“Aim to price your property at or just slightly below the going rate. Today’s buyers are highly informed, so if they sense they’re getting a deal, they’re likely to bid up a property that’s slightly underpriced, especially in areas with low inventory.”

2. Use a Real Estate Professional

This, too, may seem counterintuitive as the seller may think that he or she will make more money by avoiding a real estate commission. With this being said, studies have shown that homes typically sell for more money when handled by real estate professionals.

A study by Collateral Analytics, reveals that FSBOs don’t actually save any money, and in some cases may be costing themselves more, by not listing with an agent. The data showed that:

“FSBOs tend to sell for lower prices than comparable home sales, and in many cases below the average differential represented by the prevailing commission rate.”

Price your house at or slightly below the current market value and hire a professional. This will guarantee that you maximize the price you get for your house.

The house in Gulfport was just 1,100 square feet and needed major updating. The house in St. Petersburg had been remodeled and was near a waterfront park. The house in Seminole had a pool and a fireplace.

Although dissimilar in many ways, each house sold for $253,000 in May. That was exactly the median price of all 1,279 single-family homes sold in Pinellas County that month and is a good gauge of what buyers are willing — and able — to pay in a robust real estate market.

Hillsborough, Pasco and Hernando counties had different median prices in May. But those, too, reflected price points attractive to buyers there, especially first-time buyers.

Pasco’s $215,000 median, for example, “is kind of entry-level nowadays,” said agent Mark Ross, who sold a house in booming Land O’ Lakes for that amount in May. “A lot of houses I put on the market in this price range have multiple offers because at $215,000 and less, there really are almost no homes (in that area).”

“Median price” means that exactly half the homes in a county sell for more than that price and exactly half sell for less. Real estate experts say the median price is generally a better measure of the market than the average price, which can be skewed by a few very high or very low sales.

Since the Tampa Bay area began to recover from the housing crash, median prices have steadily risen. In May, the latest month for which figures are available, the median price for the four-county area as a whole reached $235,000. Hernando had the lowest median ($188,585) and Hillsborough the second highest ($251,245).

So if you’re in the market for a house these days, what can you expect to get for around the median price? Based on sales in May, we found:

• Median-price houses in Pasco and Hernando generally are bigger and newer than those in Pinellas and Hillsborough.

Waterfront home premiums aren’t what they used to be.

Blame catastrophic hurricanes, climate change, people’s changing tastes – or the tremendous bounceback in non-waterfront homes since the housing bust. While waterfront homes nationally are worth a total $134 billion, the price premium for single-family homes on the water has fallen to 36 percent in April 2018, down from 54 percent in 2012 and an average of 41 percent over the past 22 years.

In the decade since 2006, waterfront homes in the popular beach metro of Miami have almost recovered their average pre-recession premium of 40 percent. However, the premium during that decade has averaged 21 percent in Portland, Ore., well below its 32 percent premium prior to 2006. 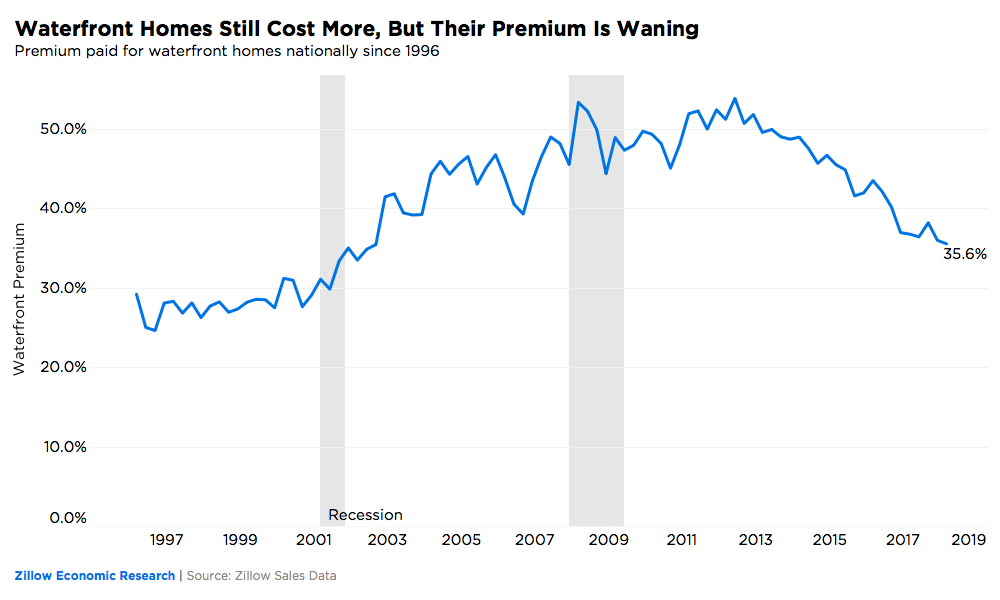 The characteristics of single-family homes on the water have changed little since 1996. The median-priced waterfront home sold in 1996 had two bathrooms, three bedrooms, was 40 years old and measured about 1,700 square feet. While getting slightly bigger, until 2018, the other characteristics for this median home did not change. The same is true for the median-priced non-waterfront home. However, while the median home on the water appreciated during those two decades by 160 percent on average, the landlocked home appreciated by an average of 100 percent.

In eight of the 10 large markets with the highest average sales premiums since 1996, home prices have been either low in general, lending a particularly large boost to homes on the waterfront and the areas where they’re located, or houses on the water have been particularly scarce because they’re located on smaller bodies of water such as lakes or rivers rather than on long stretches of beach. 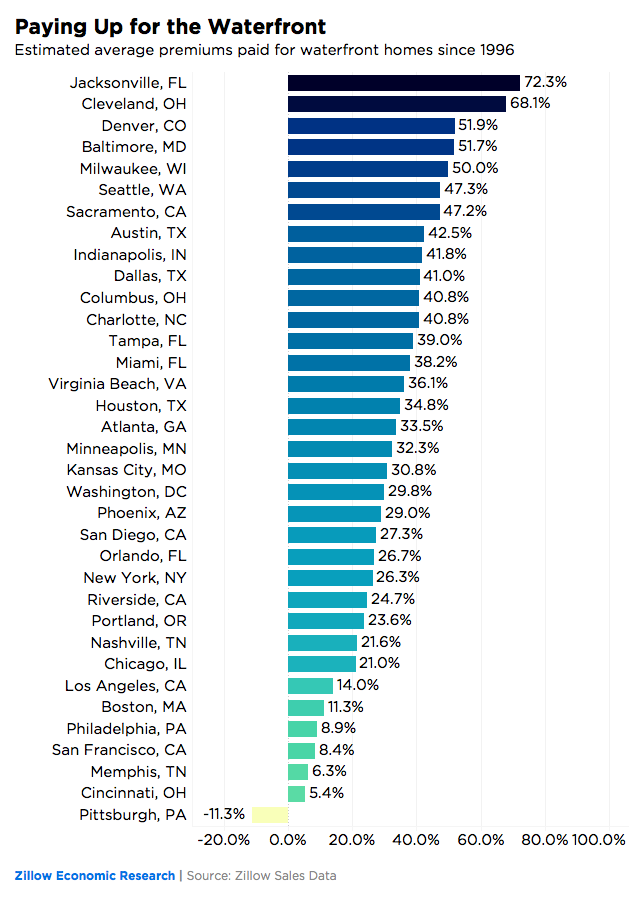 Mortgage rates moved up slightly over the past week to their highest level since late June.

The next few months will be key for gauging the health of the housing market. Existing sales appear to have peaked, sales of newly built homes are slowing and unsold inventory is rising for the first time in three years.

Meanwhile, affordability pressures are increasingly a concern in many markets, as the combination of continuous price gains and higher mortgage rates appear to be giving more prospective buyers a pause. This is why new and existing-home sales are not breaking out this summer despite the healthy economy and labor market.