Current Inventory of Homes (For Sale)

In November 2019, four fewer single-family homes were listed for sale than in November 2018. Current inventory fell 5.6% compared to October 2019.

Homes under contract dropped 30% in November 2019, as 70 single-family homes were pending versus 100 in October of this year. That as 4.1% lower than in November of last year. The Average Days on Market (DOM) shows how many days the average home is on the market before it sells. An upward trend in DOM indicates a move towards more of a Buyer’s market, a downward trend indicates a move towards more of a Seller’s market. The DOM for November 2019 of 56 days fell 9.7% from 62 days in October 2019. It increased 1.8% from 55 days in November of last year.

The Sold Price vs. Original List Price reveals the average amount that sellers are agreeing to decrease their original list price. The lower the ratio is below 100%, the more of a Buyer’s market exists, a ratio at or above 100% indicates more of a Seller’s market. November’s Sold Price vs. Original List Price of 96% stayed the same as October of this year but ticked down 1% from November 2018.

The Average For Sale Price is Depreciating

The Average Sold Price is Neutral November was a Seller’s Market*

The November 2019 Absorption Rate based on Closed Sales of 37.6 rose 4.4% compared to November a year ago. It declined 4.3% compared to October of this year.

Baby Boomers keep getting older, and that has consequences for the economy. The huge number heading toward — or already in — retirement has already left a lasting impact on the job market. Now come questions about what will happen as they sell their homes, due to downsizing or death.

This won’t be a blip. Boomers own 32 million homes across the country, about 40 percent of the total. And a new Zillow study estimates close to 20 million homes owned by older Americans will hit the market in the next two decades.

By 2037, one out of every three homes in our metro area will have sold because an owner aged 60 or older died, downsized or left some other way, Zillow found. That placed us tops among 59 large cities in the study. Tuscon, Ariz., ranked second. Miami and Orlando filled out the top four. Jacksonville placed 23rd.

Parts of the country with stagnant populations could struggle to fill the flood of inventory. Cleveland, Buffalo and Dayton, Ohio, are cities that have a large share of older residents who will leave their homes in the coming years, but fewer younger people to replace them.

In contrast, the Tampa Bay area keeps attracting more residents, a trend predicted to last for at least the next two decades.

“Tampa Bay is an example of a metro area that could take advantage of this inventory coming on the market,” said Karl Kuykendall, principal economist at IHS Markit. “It is a large, economically diverse area with population growth well above the U.S. average.”

For several years, our area has wrestled with a tight inventory of homes for sale. That has helped drive up prices and prevented some renters from becoming homeowners.

As for new homes, builders have been constrained by higher land prices, a lack of workers in some construction jobs and less access to capital than before the Great Recession. In 2005, for instance, builders broke ground on more than 21,000 new homes in the Tampa Bay area. Last year, the number was closer to 12,000.

A growing inventory of Baby Boomer homes should help loosen up the market. Not to get too morbid, but when owners die and their homes sell, it increases the housing supply. That creates more options for buyers, which can also hold down prices. Home prices in the Tampa Bay area have increased far faster than average salaries in the past decade.

“A curb on prices is good news for affordability,” Kuykendall said.

The additional inventory should also help feed the growing demand to live closer to city centers. Baby Boomers, who have owned their homes for longer than younger generations, tend to live closer to downtown areas. They weren’t as likely to get pushed into faraway suburbs due to high prices or lack of inventory.

New home construction often focuses on the periphery of big cities, where land is less expensive. The Baby Boomer trend should provide builders with opportunities closer to city centers, including freeing up lots in some areas to build duplexes, triplexes and small apartments.

“What seems most likely amid all the uncertainty is that, in the coming two decades, the construction industry will need to place a greater emphasis than before on updating existing properties, in addition to building new ones,” the Zillow report stated.

Two things to keep in mind: This trend has already begun, and it’s going to play out over a couple of decades. The housing market won’t be deluged overnight. Baby Boomers are between 55 and 75 years old and many of them will choose to “age in place” — remain in their homes for years. Think of the trend as a steady flow that will quicken as more Boomers move deeper into their 70s and 80s.

Any place that caters to retirees, including stand-alone developments or pockets within metro areas, could end up with a surplus of homes unless it attracts younger residents. The Villages, the sprawling retirement community in central Florida, has grown rapidly in the past 20 years. Once the bulk of Baby Boomers reach their 70s, the pace will likely slow, Kuykendall said.

“Places that depend largely or entirely on retirees will find it harder. They might stop growing or not grow as fast,” he said. “But for metro areas that have enough demand, it’s a manageable trend.”

A wave of homes for sale

The percentage of all the homes in a market that people 60 years and older will sell in the next two decades.

* Metro or combined statistical areas. In this case, the Tampa Bay area refers to Pinellas, Pasco, Hillsborough and Hernando counties.

Is A Bigger House Within Your Budget?

At this time of year, many families come together to celebrate the season. It’s also the time when many realize their homes are just not quite big enough to host all of their guests and loved ones. Are you one of those homeowners dreaming for a larger space to call home?

You may have enough equity in your current home to move up.

According to the Q3 2019 U.S. Home Equity & Underwater Report by ATTOM Data Solutions,

“14.4 million residential properties in the United States were considered equity rich, meaning that the combined estimated amount of loans secured by those properties was 50 percent or less of their estimated market value.”

This means that one in four of the 54 million mortgaged homes in the U.S. have at least 50% equity. If these homeowners decide to sell, they can use their equity to put toward the purchase of a new home. Maybe you’ll be one of them.

NAR recently released their 2019 Profile of Home Buyers and Sellers showing that,

“This year, home sellers cited that they sold their homes for a median of $60,000 more than they purchased it, up from $55,500 the year prior. This accounted for a 31 percent price gain, up from 29 percent the year before.”

Here’s the equity gain breakdown based on the number of years these sellers lived in their homes: 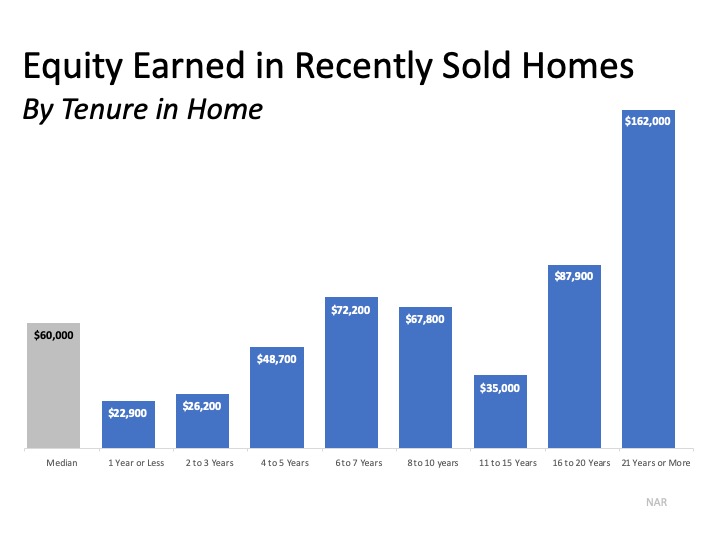 If you’re one of the many homeowners with big dreams of owning a larger home, let’s get together. Working with a trusted advisor to find out how much equity you have is a great first step in putting your move-up plan in motion. Have a Fantastic Day!